The MMA-AI Analysis Kit consists of 4 core features. Each feature focuses on satisfying a specific gambling need by the application of adequate Artificial Intelligence (AI) methodology and targets a specific gambling audience. The kit includes the AI Probabilities, the AI Correlations, the AI Value Score, and the AI Bets & Bet-Sizes.

“My focus is on betting money line markets, but I also have skills for other markets. I definitely could make money there, but most often I lack the time to also prepare for them”

(Paraphrazed from the community and my own experiences)

Why is it good for me?
Larger profit due to increased betting volume.

Who is the target audience?
Proficient, expert gamblers.

“I am confident in writing probabilities behind ‘who wins?’ and ‘how does the fight end?’, but I have hard times to partition those probabilities into more granular fight outcomes. That’s why I am sometimes missing out on some angles on the fight.”

(Paraphrazed from the community and my own experiences)

What is it?
MMA-AI is not only delivering probabilities for individual independent markets but it also is designed to represent calibrated correlations between these markets. As such the markets are a closed system, where probabilities add up to 100% (being an approximately correct probability measure learned from data) as depicted in the figure below. 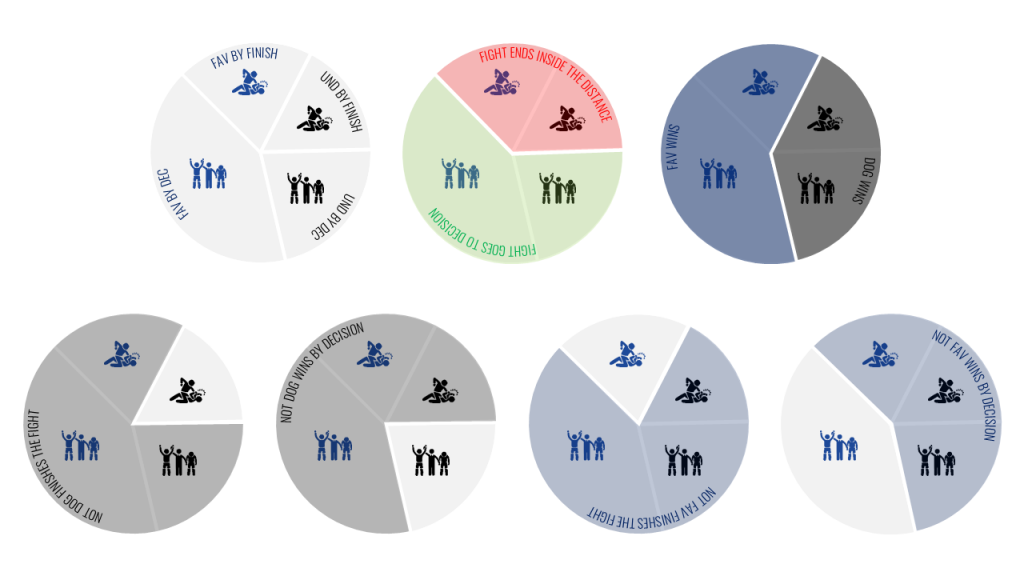 For example the figure below shows, how the subjective modification of the FAV-BY-DEC probability can be propagated to other probabilities based on simply summing and substracting probabilities. 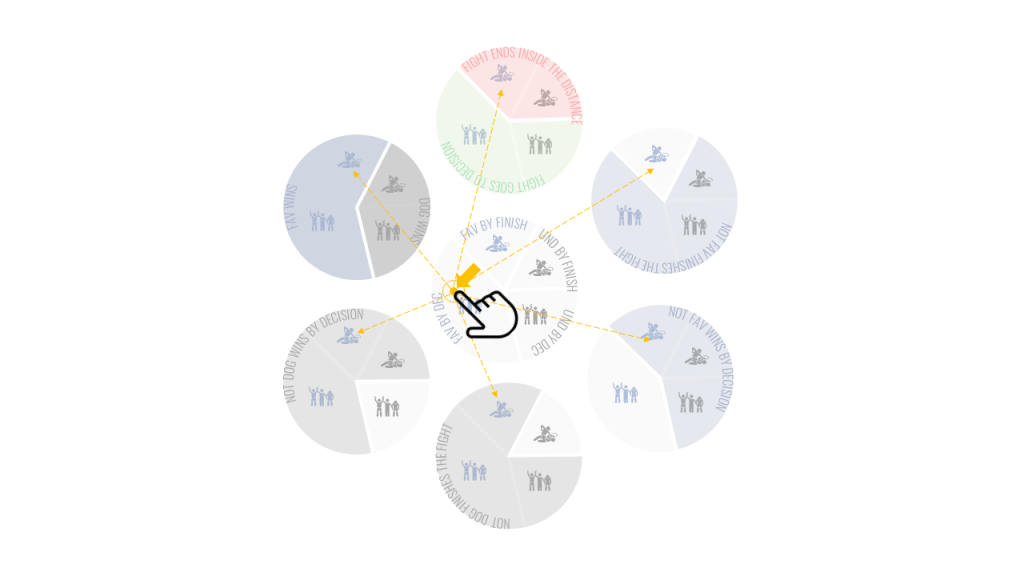 Another example is shown in the figure below, where the subjective modification of the ML- and ITD/NITD probabilities are propagated to the FAV-BY-DEC probability. 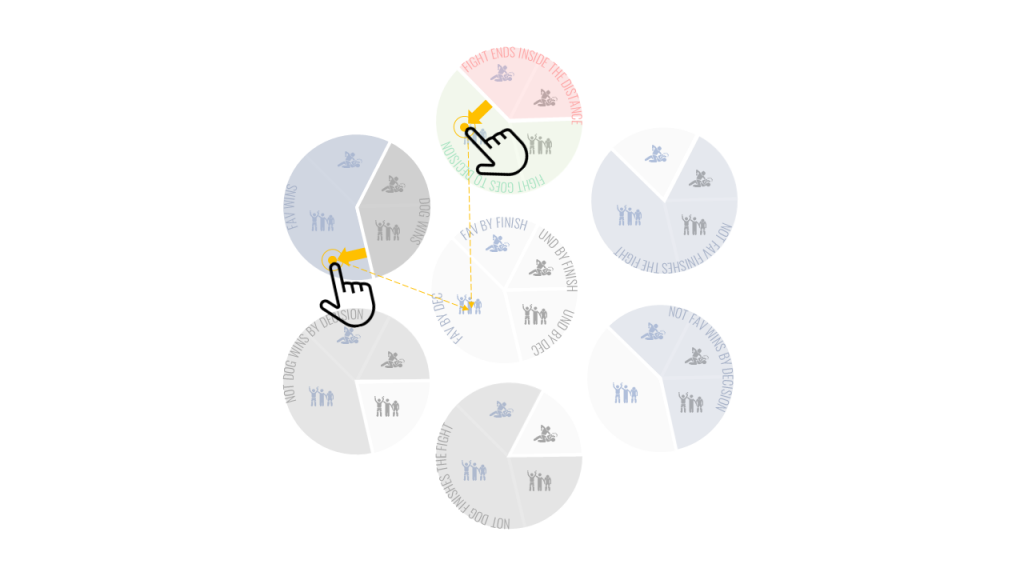 Who is the target audience?
Expert gamblers.

What is it?
The bets are identical to the one’s post over on my third-party tracked record. They can be found here.
AI bet sizes are based on a special version of the Kelly Criterion, where its parameters are also learned from data.

Why is it good for me?
Optimized risk- / value balance for your betting investments. The return on investment (ROI) is tuned to be as high as possible, while the chance to get broke is reduced as much as possible.

Who is the target audience?
Beginner gamblers (Just copy the bets).

What is it?
Scores bouts with an optimal risk- / value balancing criterion according to the principle “Win often with good value.”

There are many ways to assess the value of market prices probabilistically such as Kelly Criterion and Expected Value. I present a novel value score (AI-RV), that according to my past 2 years of experience and specialized knowledge statistics, combines aspects of well-known methods to an optimal score with regard to risk- / reward balance.

In the tool below you can inspect the RV score for bouts from UFC Vegas 17. Later in this section, we will analyze if the maximum scores picked winners properly.

Why is it good for me?
The score helps to identify bouts, that you win often and that also have good value.Its purpose is to avoid long losing streaks. It is an optimal compromise between pure value and pure chalk bets.

Who is the target audience?
Beginner, proficient, expert gamblers.

* You need to hover over the stars for exact values.

TOP1/2 all picked winners. TOP1 picked 8/10 correctly.
I used much of this information for my betting decision at UFC Vegas 17, where I implemented the opposing props as hedge bets.

We use cookies on our website to give you the most relevant experience by remembering your preferences and repeat visits. By clicking “Accept”, you consent to the use of ALL the cookies.
Cookie settingsACCEPT
Manage consent

If you leave a comment on our site you may opt-in to saving your name, email address and website in cookies. These are for your convenience so that you do not have to fill in your details again when you leave another comment. These cookies will last for one year.

If you visit our login page, we will set a temporary cookie to determine if your browser accepts cookies. This cookie contains no personal data and is discarded when you close your browser.

If you edit or publish an article, an additional cookie will be saved in your browser. This cookie includes no personal data and simply indicates the post ID of the article you just edited. It expires after 1 day.
Necessary Always Enabled